Kaho Nakamura is a painter whose work in many ways mirrors the way young artists of our time think. These newcomers are often trying to break through barriers set by older, more experienced artists who believe they are fit to set rules for everyone that’s trying to express themselves through some form of art. Naturally, young people are not at peace with such concepts. This, of course, can also be attributed to the rebellious nature in all of us , our own personal James Deans that fuel our adolescent years. Kaho Nakamura is one of these artists that’s trying to turn the next page of art history. Her paintings represent themes from modern culture using a striking method in oil that has a strong visual and encompassing atmosphere.

Growing Up In Kagoshima

Kaho Nakamura is yet another recent artist that comes to us from Japan, a country that has produced an enormous number of potentially world-shaking painters in the last few years. Nakamura herself is from Kagoshima, the capital city of Kagoshima Prefecture at the southwestern tip of the Kyushu island, one the east side of Japan. She was brought up in a very liberal atmosphere, atypical for her country which has a reputation for being very strict and traditional. This can be attributed to the general social attitude of Kagoshima, which is much laxer when compared to the rest of The Land of the Rising Sun – probably due to its high rate of tourism. Since her early teens, Kaho was fascinated by the modern look of her hometown and loved every chance of exploring Kagoshima after dark. She would spend countless nights peaking from her bedroom window, secretly watching older boys and girls going to night clubs in their fanciest clothes. As a mean for dealing with her inability to join them, Nakamura started painting in oil, trying to channel what she saw around her on canvas. Ultimately, she grew old enough to enjoy her city at night as well – but her love for painting never left her. All that succeeded to change as she was growing up is that now she was able to find inspiration in observing things much closer and in much more detail.

Nakamura’s paintings are very sexual in nature but are far from tasteless – in fact, they are quite the opposite. Her erotic work focuses mostly on depicting Japanese woman in different poses while they’re bending, stretching or simply relaxing. All her pieces describe no more than one person at a time, which gives them an additional dose of intimacy. Over the course of the years, Kaho Nakamura has managed to develop an excellent style when working in oil. Being naturally talented helped a lot, but practice makes perfect and Kaho is a good proof of that statement. It should be noted that her subjects are not nudes in the traditional sense of the word – Nakamura likes to find a nice balance between naked and covered body parts of her subjects. Another feature obvious on all her paintings is the background, or rather what she chooses to put in the background. Nakamura places candy and sweets in the back of her painting’s frames, in most cases ice creams. The interesting part is that most of Kaho’s women are not really connected to the candy behind them in any way, so it almost seems as they don’t belong together. They are intentionally depicted like that with a goal of creating an illusion of dreams and desires – much like the works of Will Cotton, an artist that may have had an extreme influence on Kaho Nakamura. As for the question why candy, the answer may be quite simple. Her town is widely known as the sweets capital of Western Japan, as many types of desserts are produced in Kagoshima Prefecture – especially ice creams. So Nakamura may have gone by the good old saying of stick to what you know.

Part Of A New Wave

Kaho Nakamura can be described as a part of a new Contemporary Pop wave that appears to be rising both in the East and West. These pioneers are desperately seeking to establish new kinds of expression, both in the sense of technique and what they chose as subjects. Nakamura depicts what she knows, what surrounds her day-to-day life, things she feels most comfortable with – much more so than she could ever be if she as well chose to paint French villages or European cathedrals as art’s greats one did. As was mentioned before, Kaho simply sticks to what she knows. This is a normal process that has been reported many times in art history and it is only natural for modern painters to try and push through set boundaries. Since Kaho is still very young, we’ll just have to wait and see where her art will go next. 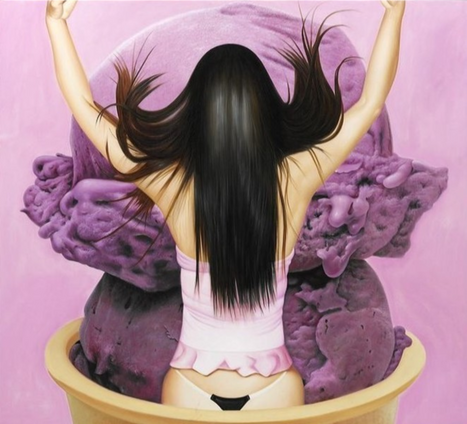 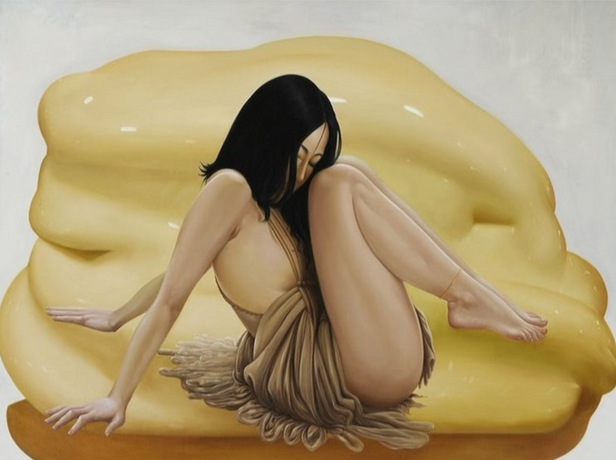